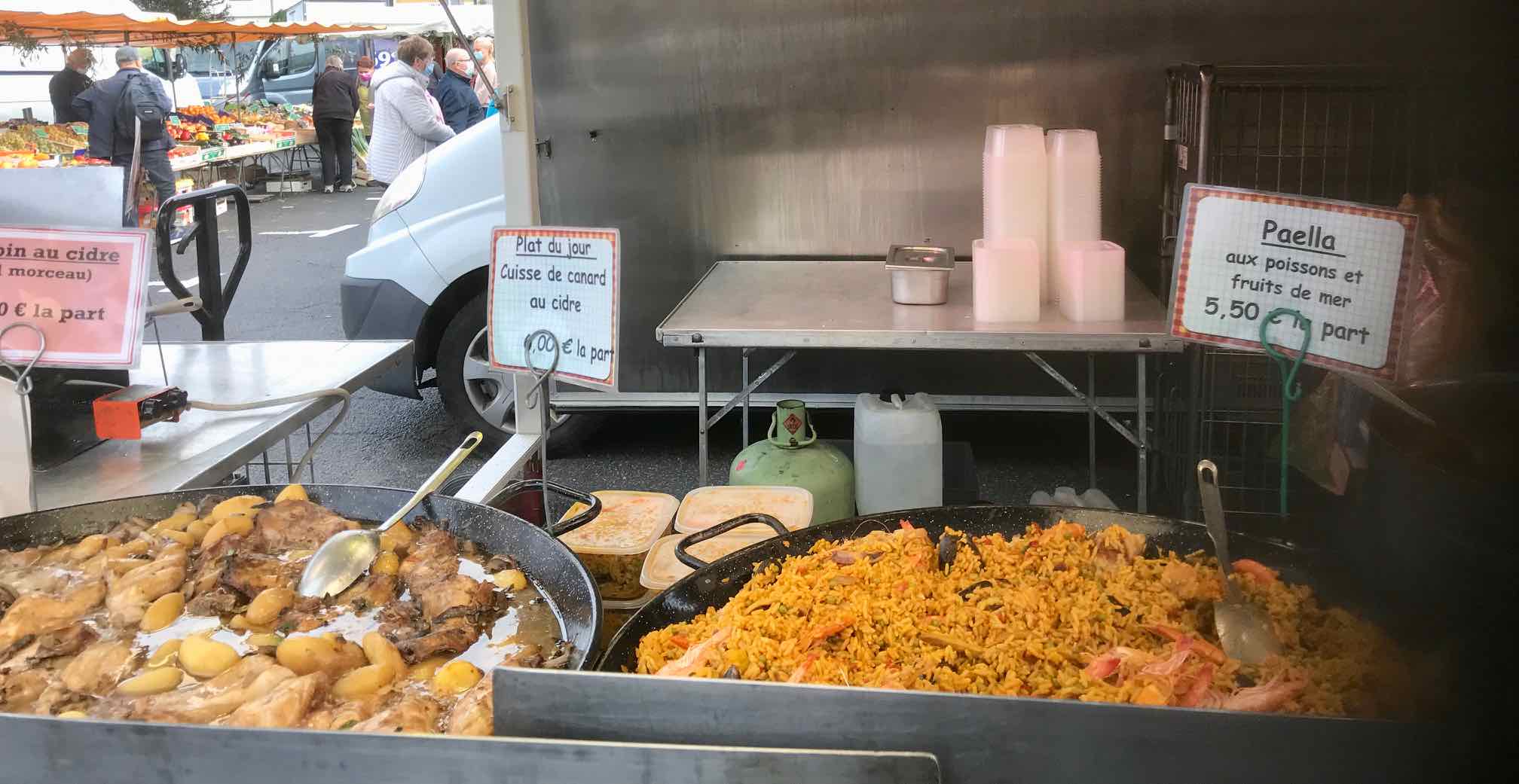 How is your French? Did you work out the translations of the signs in the market photo our Chic & Slim Special Correspondent Kat provided for the French Ready Meals Nouvelles?

Beginning on the left with the sign of which you can only see part, au cidre is the way the French indicate that something is cooked in cider. Normandy grows a lot of apples and makes a lot of apple cider that they use in preparing many dishes. Morceau indicates it is sold by the piece, but you cannot see enough of the sign to know how many Euros — or pieces of what — is cooked in the cider.

In the middle sign, Plat du jour, literally plate of the day. We would probably say “daily special” in American cafes and restaurants. Cuisse is thigh and canard is duck. Thus: duck thigh in cider. La part, the part, meaning the price is per portion that is sold in those plastic containers that you can see on the shelf in the back.

Paella is the Spanish rice and fish dish that is usually baked. In this case, aux poissons et fruits de mer. My paella recipe calls also for sausage, but according to that sign there is no sausage in this version. (That would make it acceptable to even those who did not eat pork.) But this version is made with fish and shellfish. Aux is the plural of au and used because they have used the plurals for the poissons and fruits de mer. Fruits de mer, literally fruits of the sea, is shellfish, but octopus is also sometimes included in fruits de mer even though an octopus does not have a shell.

In case you have not discovered it, the quickest way to get a translation from French (or many other languages) is to go to:

If you don’t know the language for which you need a translation, the software can usually figure that out for you. Though there are numerous words that are spelled the same in more than one language.

Warning: Google’s translation software is getting better, but sometimes it is more literal than exact. Using it works better if you have a basic knowledge of the language from which you need a translation to English so you can spot the goofs.

Rocki (and other teachers of French), if you see problems with my translation above, do not hesitate let me know. My French is rusty. More so year by year.

The weather here is continuing to be beautiful autumn and I am enjoying outside work. My current project is planting garlic for harvest next June and hoping that no repeat of the Texas Freeze stunts the crop as it did last winter. I cook with a lot of garlic and prefer the Mild Italian variety because it agrees with my digestive system and works well in most of my recipes.

My son tried growing a variety called Transylvania. Oh dear! That garlic was definitely strong enough to ward off vampires !