A tranquil spot, a cup of tea, a book, and something to nibble. Afternoon tea is my favorite time of day. Please join me for Thé de 5 Heures. 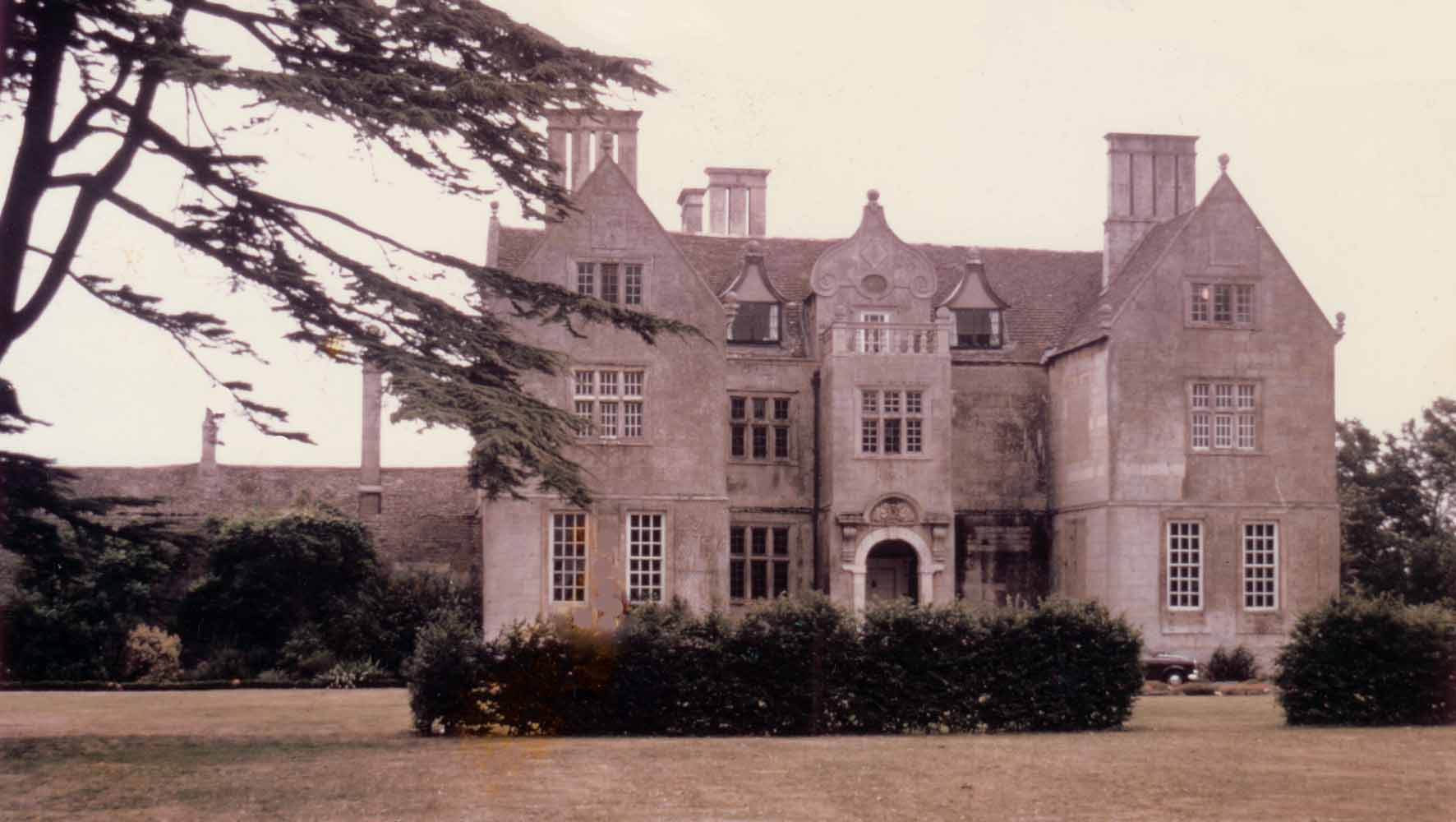 My first tea at Cotterstock Hall definitely rates as one of the most memorable teas of my almost half century of afternoon tea. I still recall the aroma of the China black tea wafting from the elegant porcelain cup — and the taste of the rich walnut cake as we sat before the cozy fire that burned beneath the drawing room’s lovely stone mantel.

The 300-year-old house had not long before been purchased by an English first cousin of my father-in-law’s. My husband and I were vacationing in London and Cousin Lewis and his wife invited us to come and stay in the elegant old 17th century country house they were in the process of restoring.

Several years before this my first visit to England, I had become a devotee of country house mysteries as penned by Agatha Christie and Georgette Heyer. Now I had this marvelous opportunity to experience a house, the sort that provided the settings for these mystery novels I loved. I was elated.

The conversation during teatime was, naturally, the house, its architecture, and its history from its completion in 1658. Diligent research was providing the foundation for restoration decisions being made. As part of the research, bricks from the cellar had been carbon dated to the 13th century. The 17th century house had apparently been built on the foundation of an earlier edifice. One topic that invariably comes up in discussing a house of Cotterstock Hall's vintage: Was there a ghost? No. One thing that seemed to set Cotterstock Hall apart from mansions of similar type and age was they had found absolutely no indication that there had ever been any ghostly phenomena associated with the place. Cousin Lewis and his wife had not seen any signs themselves. That was in 1970.

In 2012, Hollywood would supply the ghost for Cotterstock Hall when the property was chosen for the filming of The Woman in Black, a supernatural tale starring Daniel Radcliffe of Harry Potter fame and Ciaran Hinds, an actor Jane Austen fans might know for his leading role as Captain Wentworth in the BBC production of Persuasion.

Cousin Lewis’ wife Avril assured me, however, that the room in which I was staying had housed the writer John Dryden. As an aspiring writer well-steeped in both English history and literature, I was thrilled to be staying in a room that during the last years of the 17th century had been occupied by England’s Poet Laureate and best known writer of his era.

I am not sure how the room was furnished when John Dryden was the houseguest of his cousin Elizabeth and her husband, but when I was the occupant of the “Dryden Room,” it was a cozy chamber with a single bed. Beside the bed stood a night stand that held a reading lamp and an open book of John Dryden’s poems. The built-in bookshelves housed a collection of family biographies. The 17th century paneling of the room was a work of art.

When Cousin Lewis and his wife bought the property in the 1960s, Cotterstock Hall had been unoccupied for many years. (A part was being used for hay storage, I was told.) The couple devoted decades of effort — as well as a great deal of money — restoring Cotterstock Hall to its former glory. In the photo below I am visiting Fotheringhay Church with Cousin Lewis, the restorer of Cotterstock Hall. 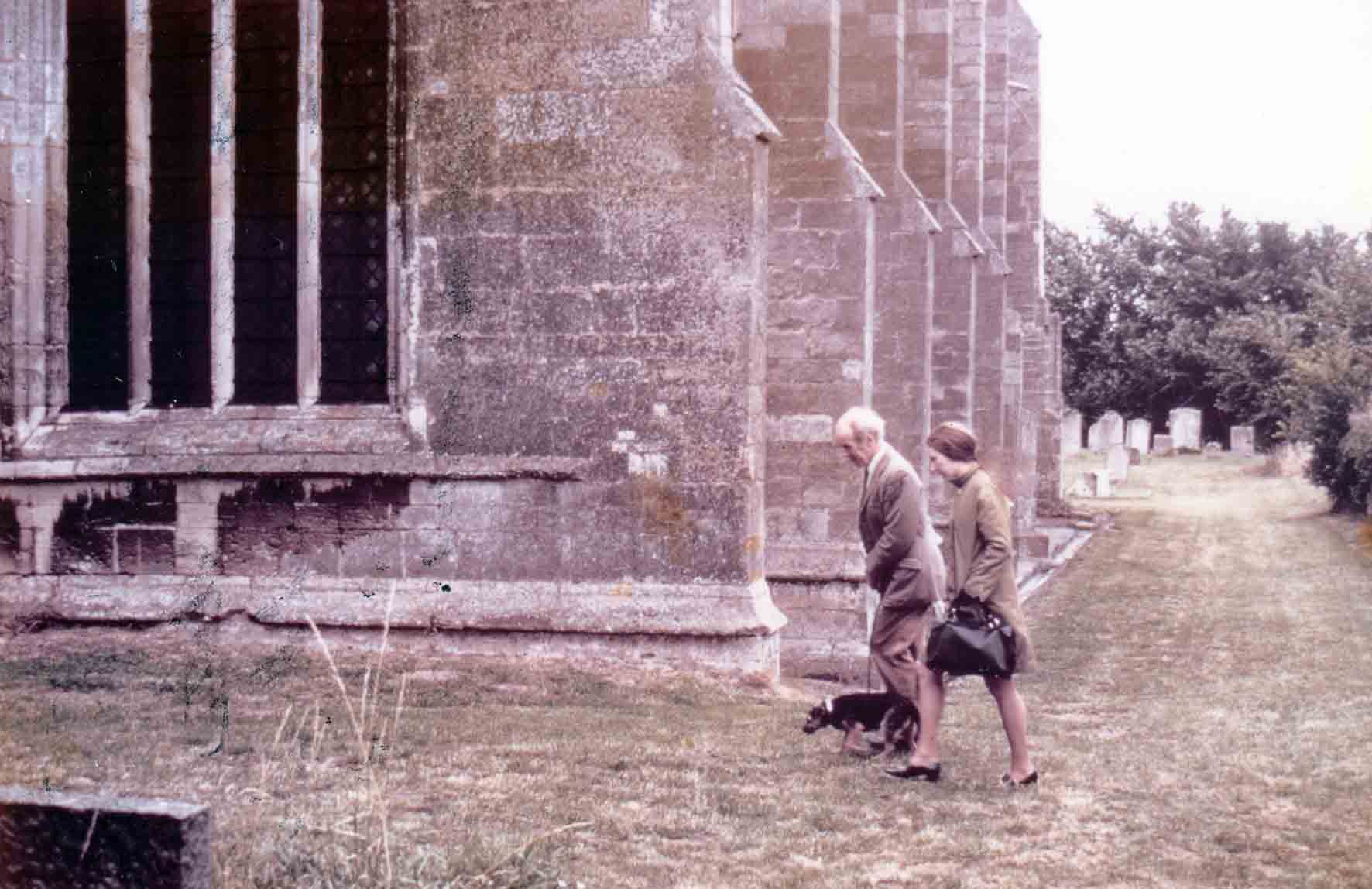 I have not visited Cotterstock Hall many years now, but recently I was able to see photos in the Daily Mail online. The article photos, taken by Photographer Haakon Dewing, a specialist in property photograph, will give you an excellent idea of the wonderful restoration Cousin Lewis and his elegant wife accomplished at Cotterstock Hall.

I suspect that the condition of Cotterstock Hall on my first visit in 1970, when most of the house and outbuildings had not yet been restored, likely looked more as the house appears in the film than the photos you will see on the links given below in the "to read" listing.

Keemun China Black Tea. Especially well-loved in England, Keemun China black tea has a rich fruity, winey flavor with an aroma that is often described as toasty or smoky.

Walnut Cake. The walnut cake bought in a London bakery and brought down to Cotterstock Hall for teatime was a rich, flavorful, firm cake. The walnuts sharp flavor were a perfect match for the cake’s creamy sweetness.

Cotterstock Hall in The Daily Mail

The second photo in this article (labeled reception room) I believe is the drawing room in which we had that first teatime at Cotterstock Hall. Toward the end of the article is a photo of the Dryden Room in which I stayed.

Read about A French Tea